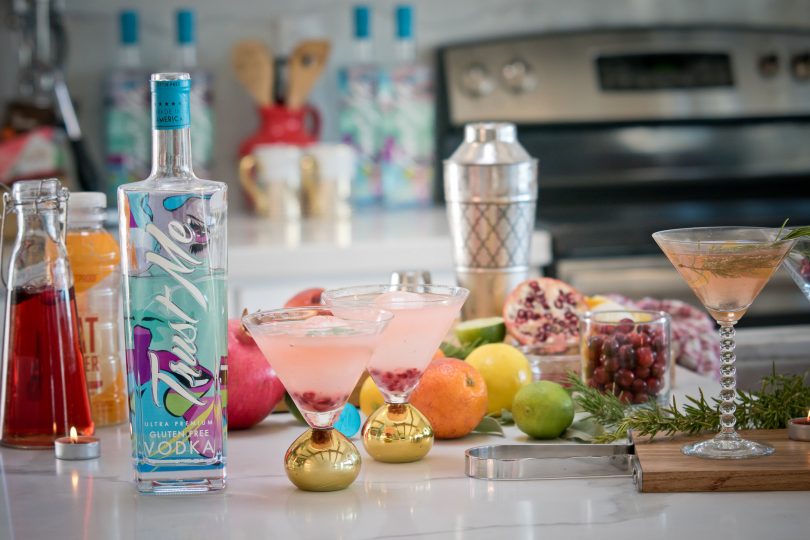 This holiday season, we’ve partnered with Veronica Culver, Founder at The Enchanted Cook. Veronica is a Bulletproof® Ambassador and a food and fitness blogger who is always looking to optimize her daily life. This week Veronica created several holiday-themed vodka cocktails that are also Bulletproof Diet friendly so you can stay on plan and hopefully hangover free throughout the holidays. Drinking alcohol is not technically “Bulletproof”, however if you are going to drink, you’ll want to minimize the negative effects you get from a typical cocktail that is most likely a sugar/carb/gluten bomb – a recipe for hangovers and weight gain. You might also want to leverage this alcohol guide published by Bulletproof. I personally swear by their Bulletproof Coconut Charcoal and always carry it with me. The first recipe is this White Sage Elixir Martini. It’s mildly sweet despite not having any added sugar – thanks to the addition of Bulletproof FATWater infused with B vitamins and Brain Octane. The blood orange falls in the “suspect” or yellow zone of the Bulletproof Diet Roadmap. There is only a small amount (juice of 1/2 an orange, or approximately 1 ounce) in this drink however, please be aware in case you are sensitive to oranges. The fresh sage adds a dimension that doesn’t overpower yet is noticeable in just the right way. And let’s face it, this cocktail is stunning to look at. Impress your friends with this craft cocktail that is actually very easy to make. Fancy ice cube optional. 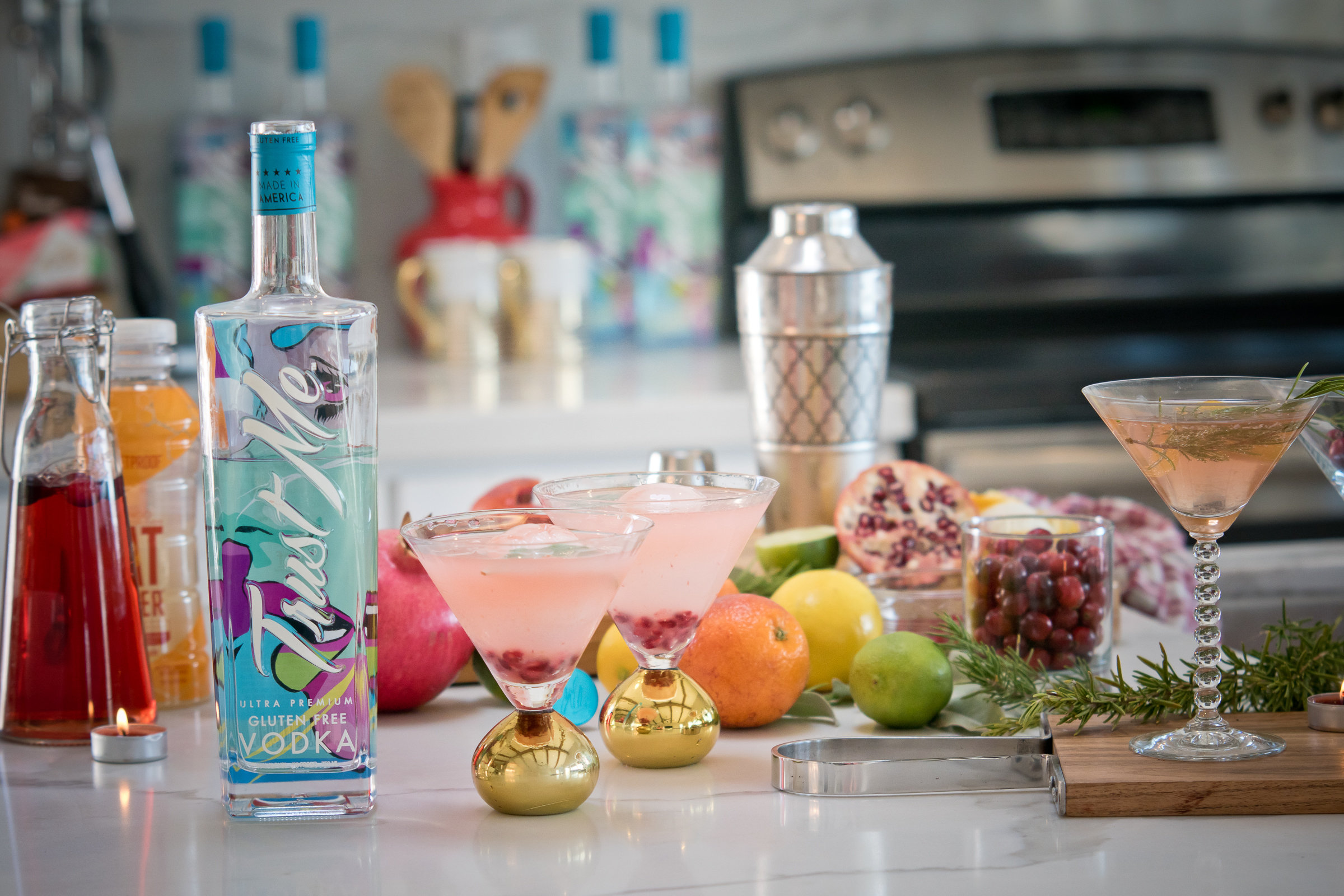 White Sage Elixir Martini makes one cocktail 2 oz. Trust Me Gluten Free Vodka ½ of a blood orange, freshly squeezed (or 1/2 of a medium size orange, if blood oranges aren’t in season) ½ of a lime, freshly squeezed Bulletproof Mango FATWater (or your favorite FATWater flavor) to top it off leaf of fresh white sage (or regular sage) pomegranate arils/seeds (optional) Fill a cocktail shaker half full of ice and add Trust Me Gluten Free Vodka, blood orange juice and lime juice. Shake well, then strain into an ice-filled rocks glass that has been rimmed with fresh sage (just rub the rim of the glass with the sage). Smack the sage between your palms to release more of its aromatic oils, then place the leaf in the cocktail. Top off with FATWater. FATWater is delicious and adds just the right amount of sweetness to this cocktail without adding any sugar. It’s also infused with Brain Octane oil and B vitamins to help keep you hydrated and hangover free. Optional: Add a teaspoon or so of pomegranate arils to the cocktail for a splash of red color. You may also consume the arils which are a source of vitamins, like vitamin K and C, and polyphenols. Optional: For an extra special presentation, use a fancy ice cube like the round one pictured and float the sage leaf on top before serving.
November 21, 2017 November 24, 2017 Uncategorized 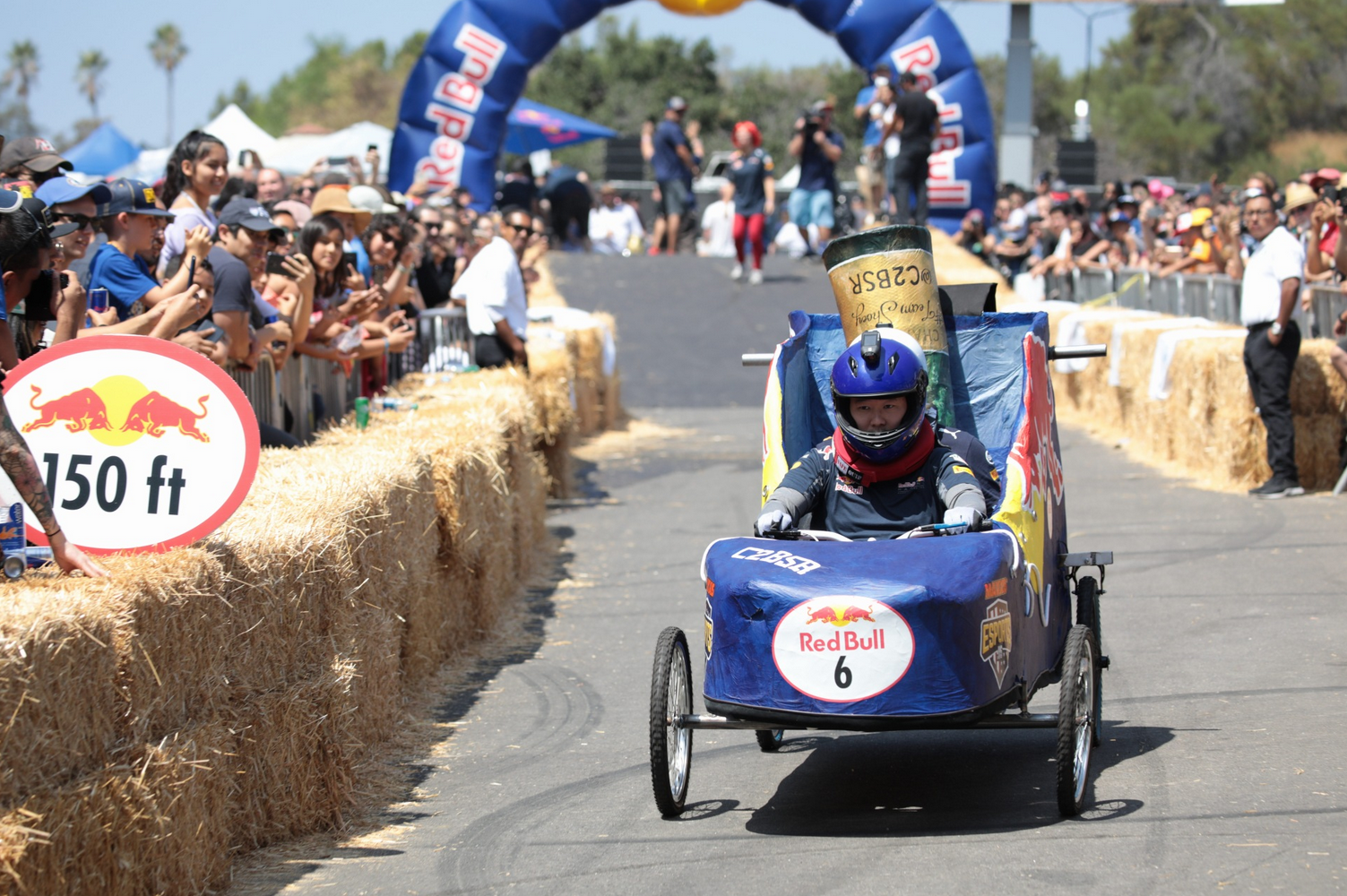 Seems like a good idea for the first 150 ft. Red Bull does not disappoint when it comes to mixing fun with a heavy dose of crazy. The infamous Soapbox Races returned to Elysian Park in Los Angeles, California on Sunday. After a six-year hiatus crowds lined the streets to watch adrenaline junkies race non-motorized soapboxes through sharp chicanes, corners and jumps in hopes of even reaching the finish line. 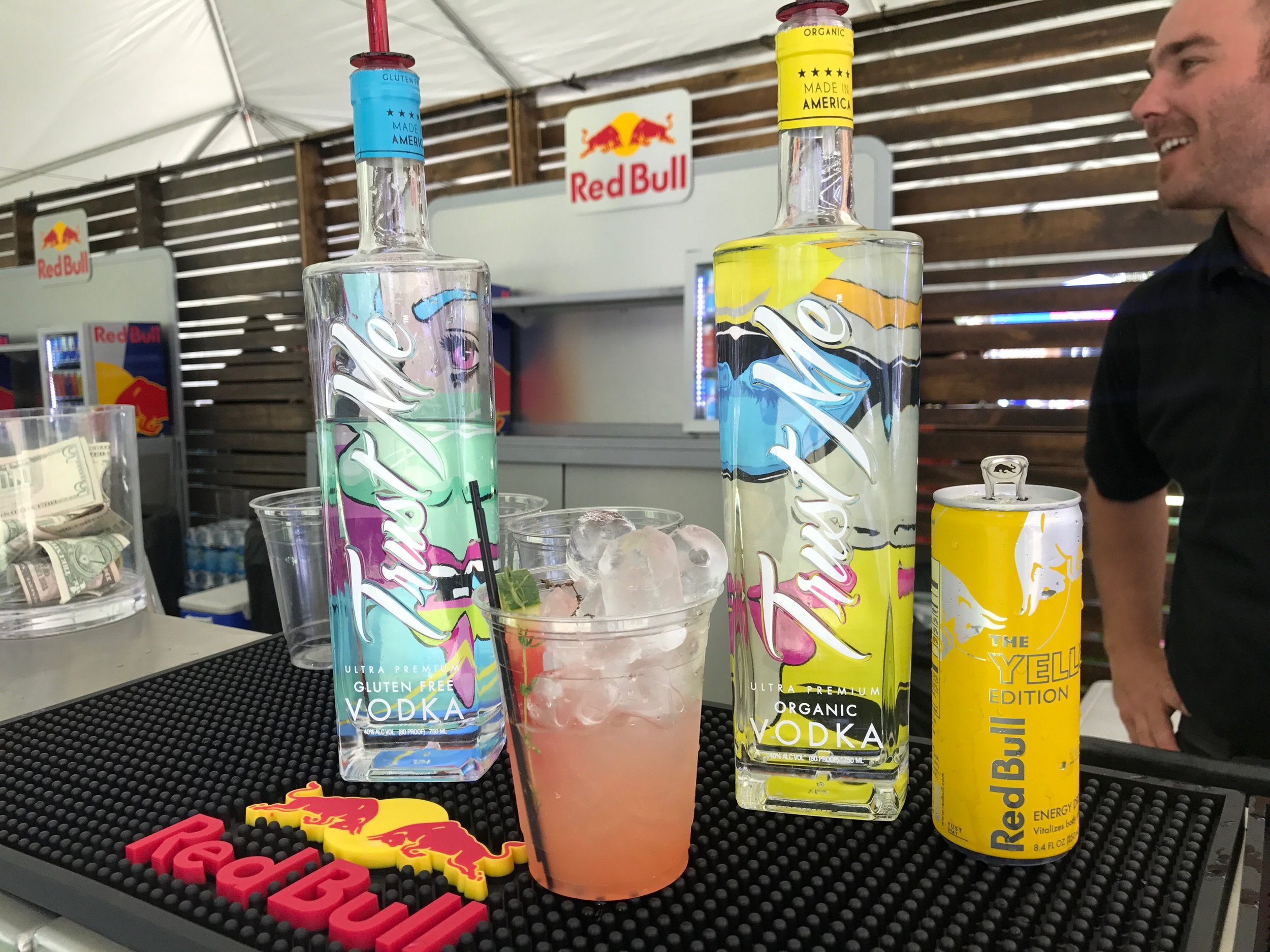 The VIP area was very colorful with the new James Haunt artist bottles. For those watching from the sidelines, Trust Me Vodka had the privilege of supplying ice cold cocktails for Sunday Funday. While 70 hand selected entries waited their turn to blast the downhill, our own James Haunt debuted his new bottles while doing some live painting that fit the race scene perfectly and kept the VIPs cool and happy. 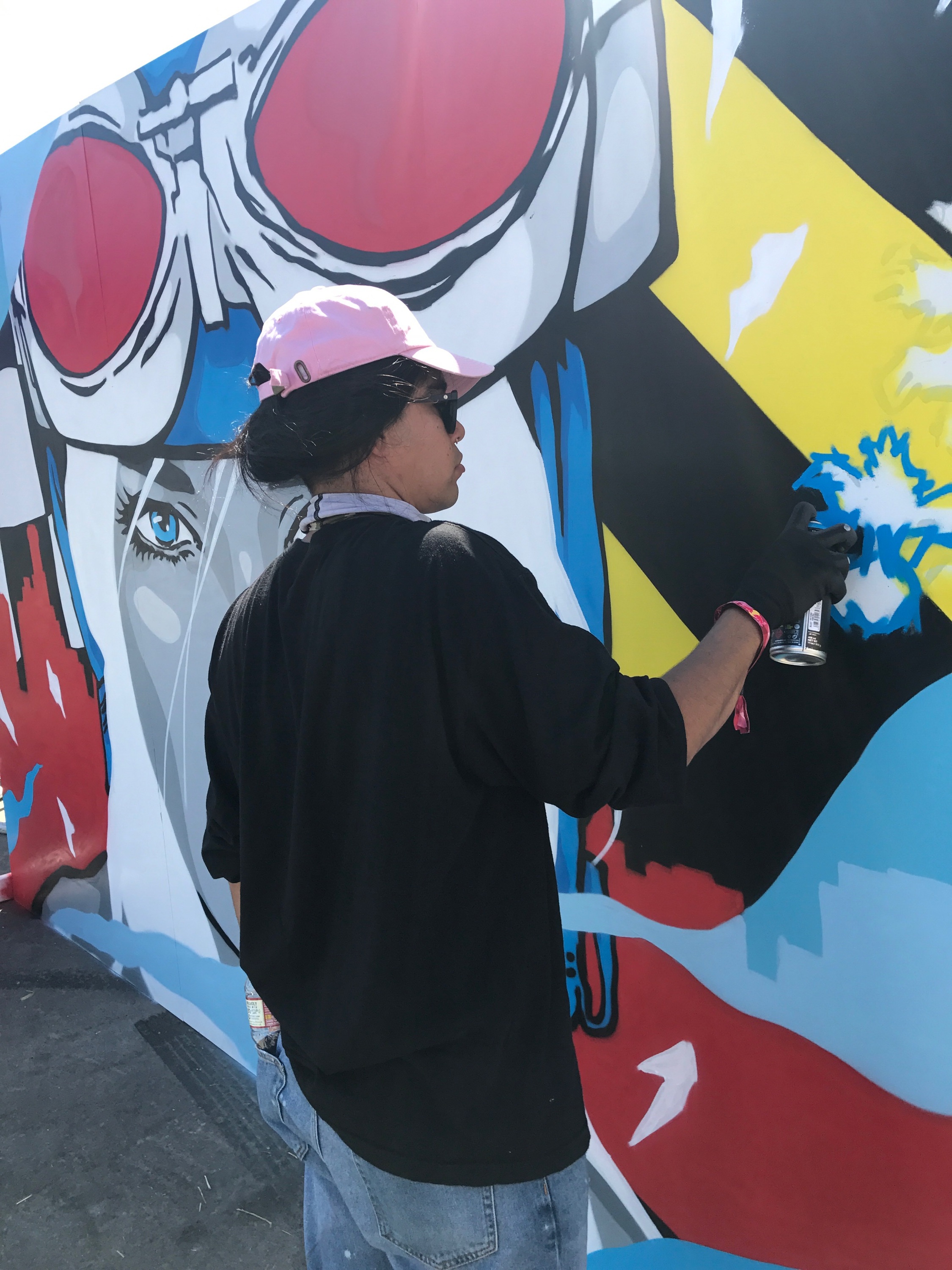 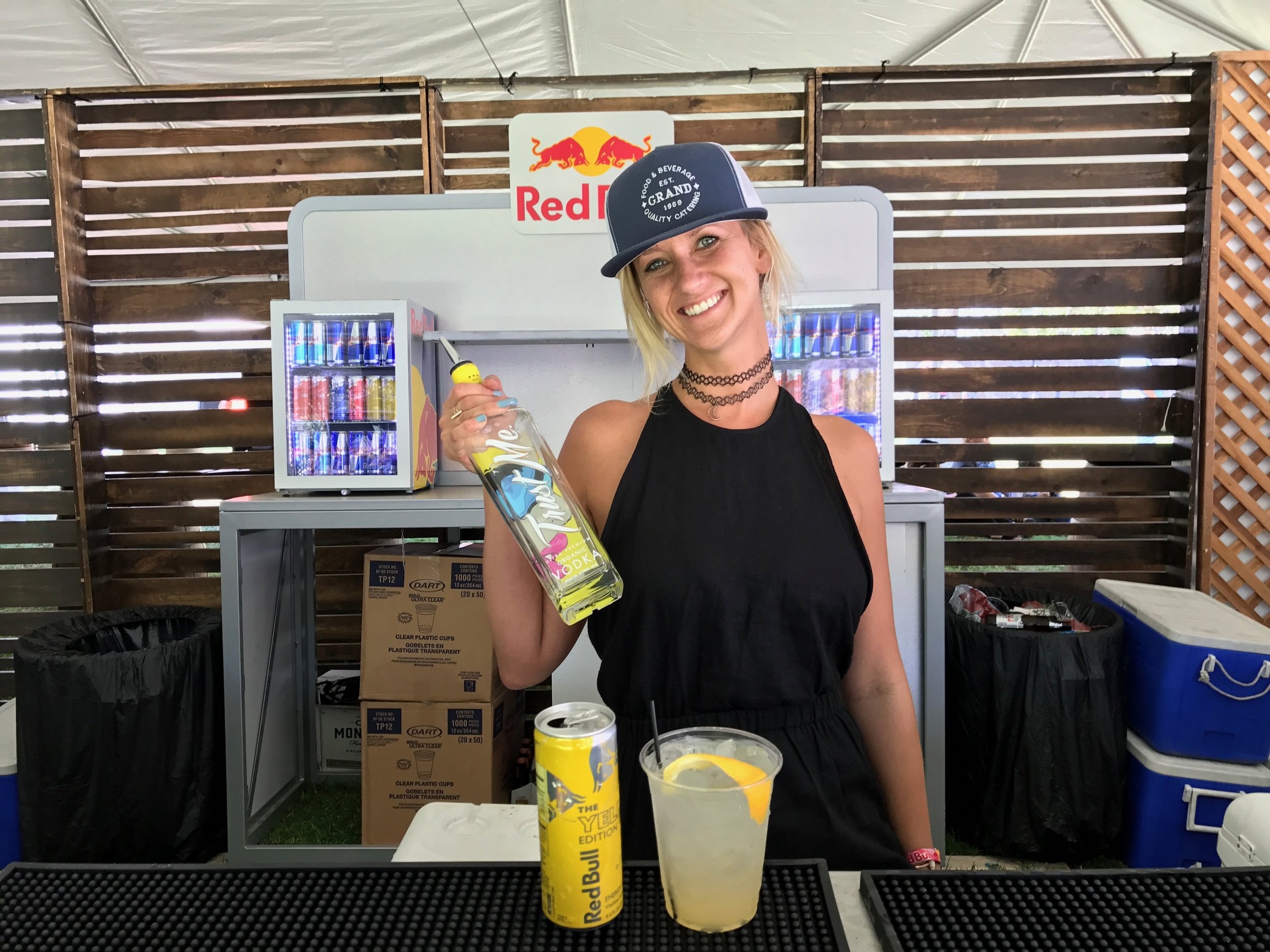 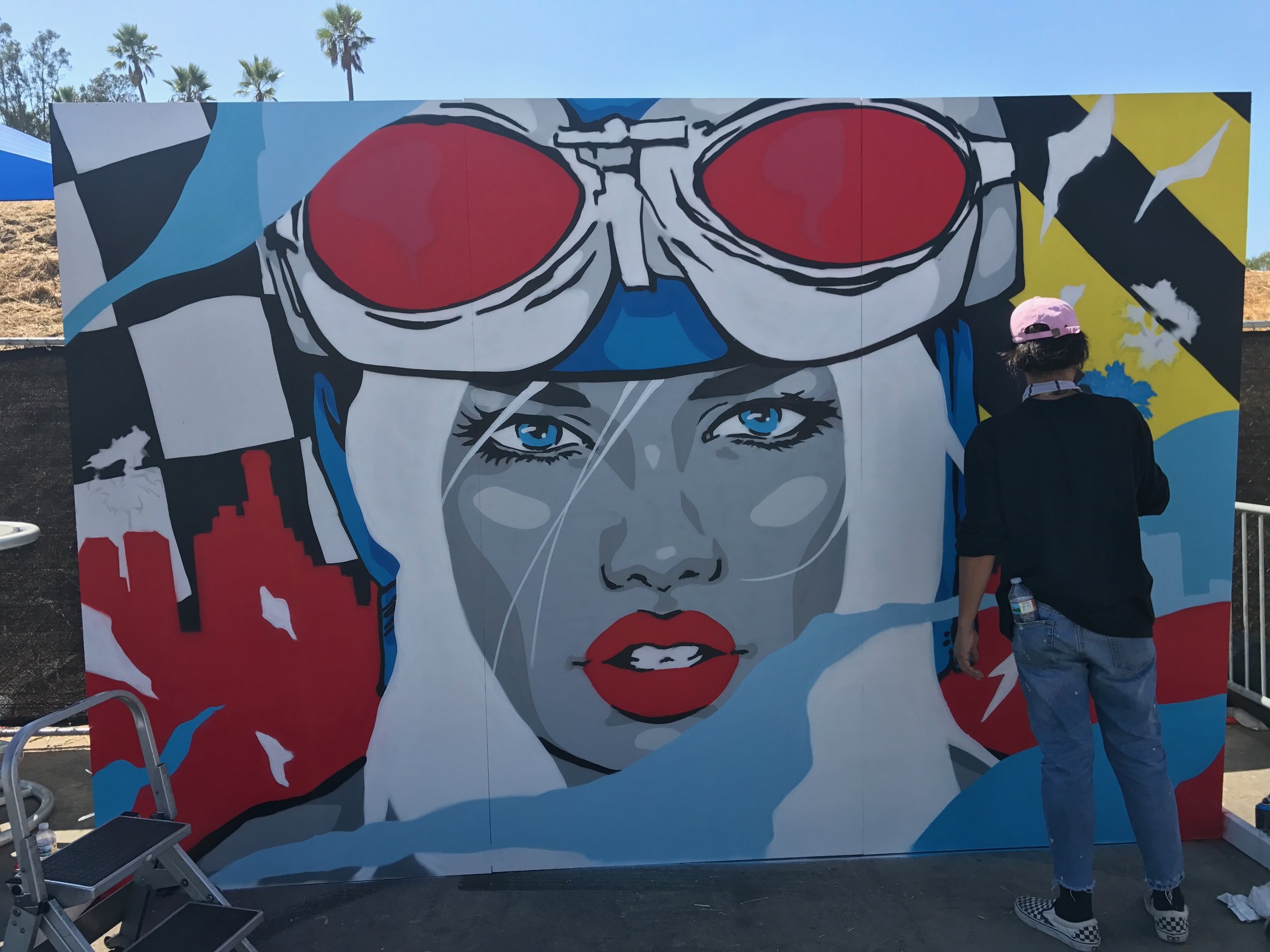 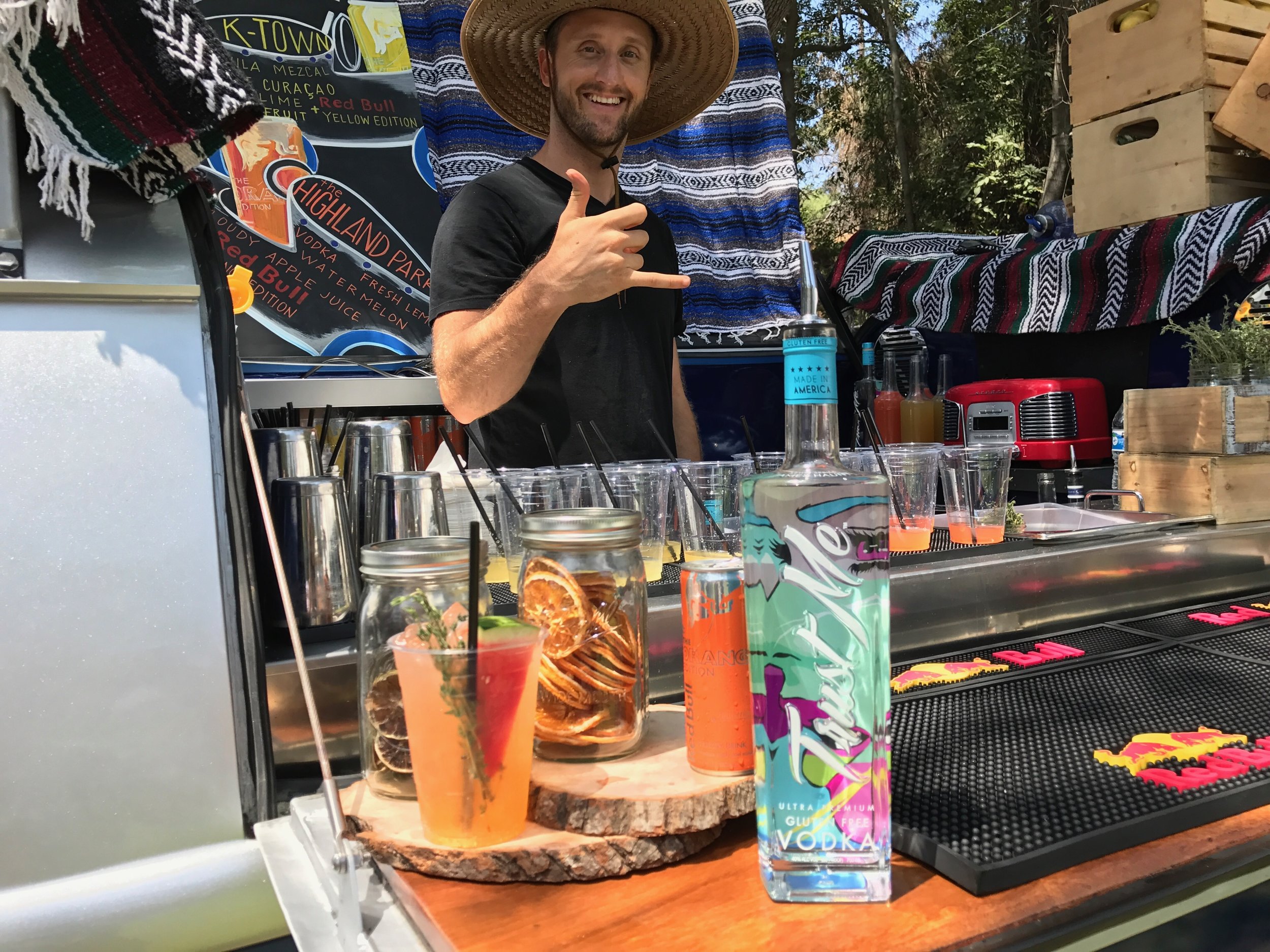 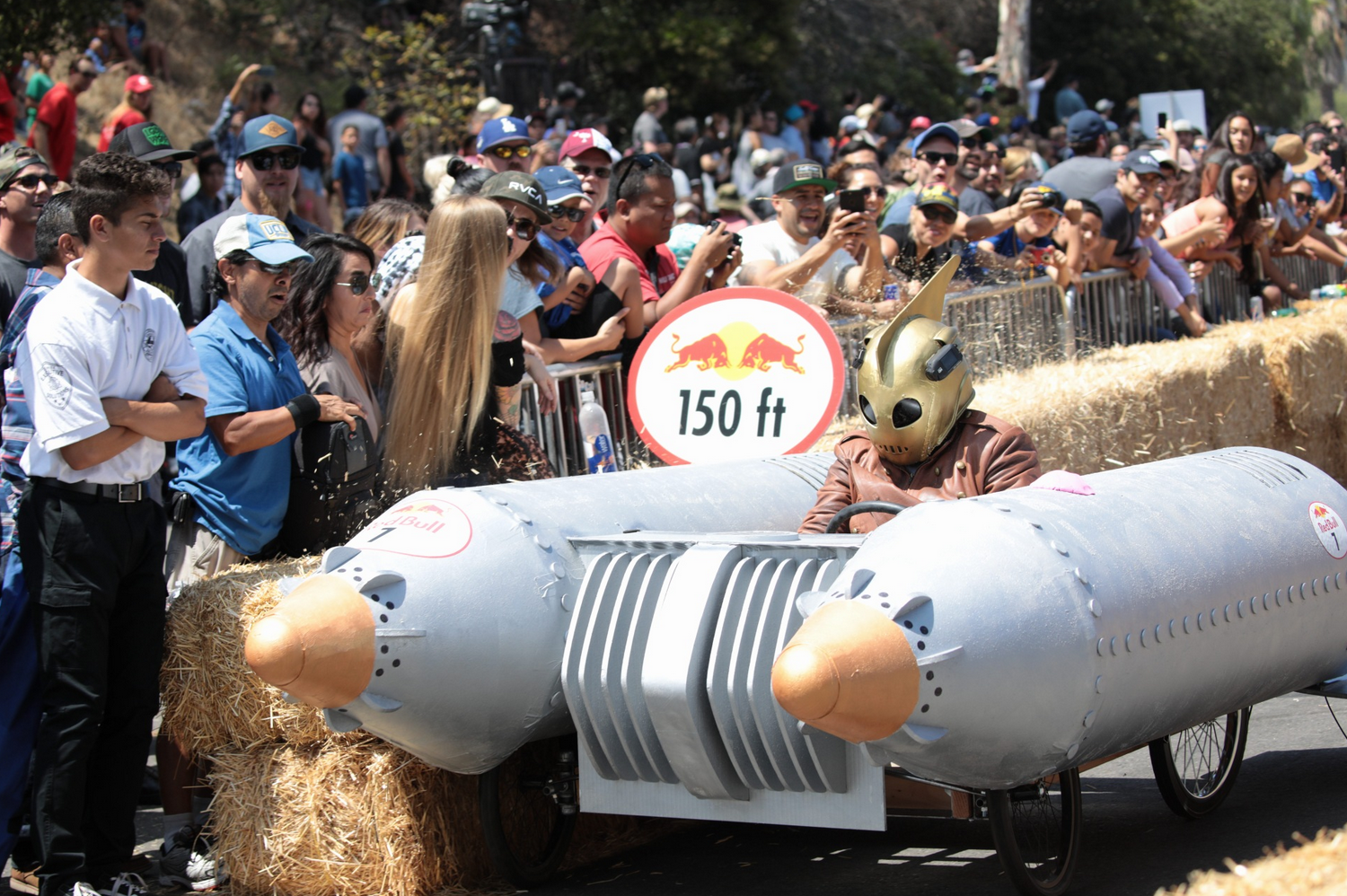 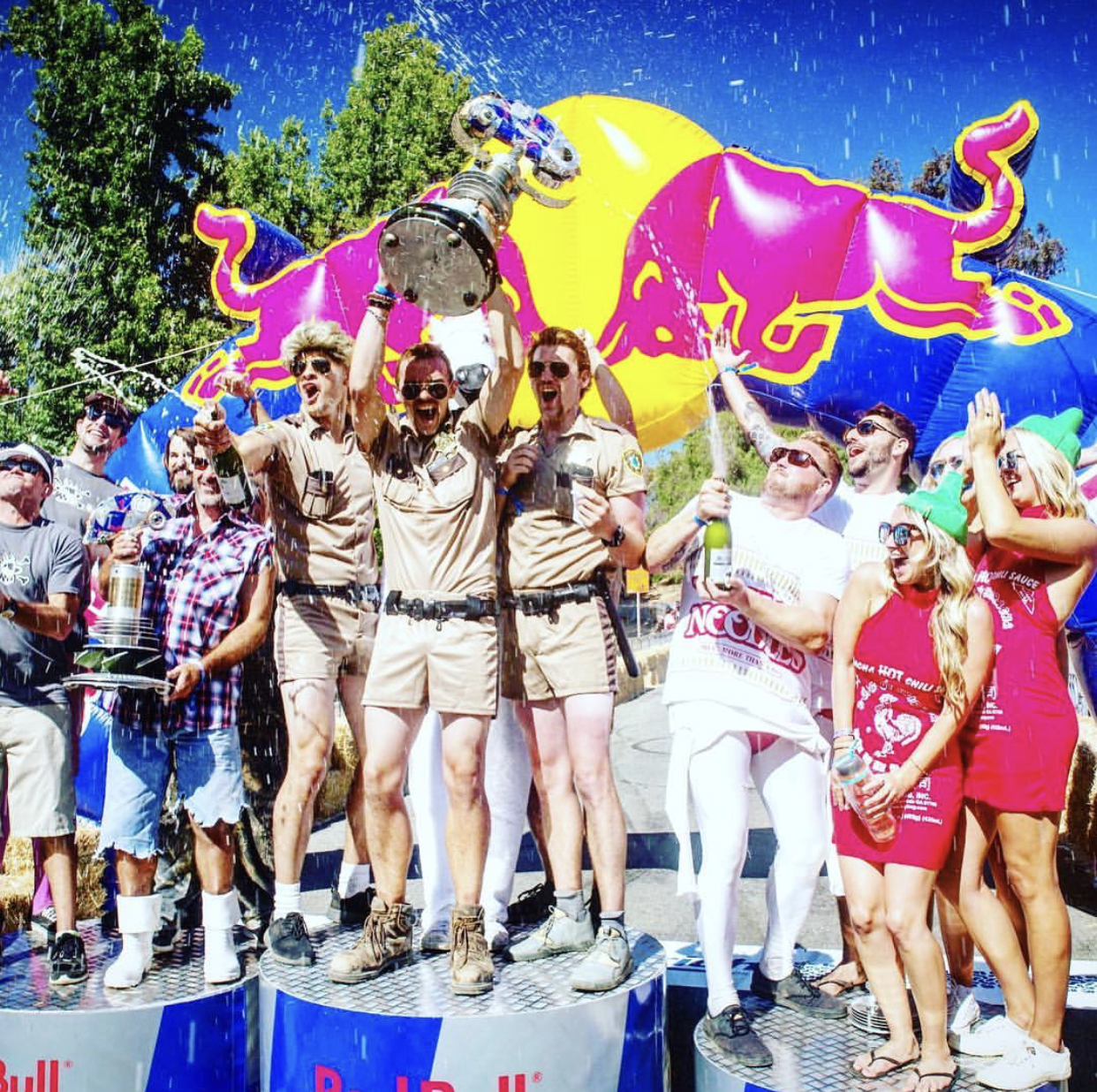 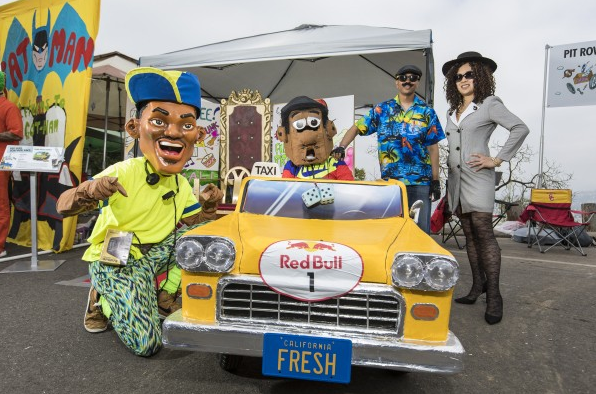 August 22, 2017 November 23, 2017 Uncategorized
Trust Me Vodka and LA based artist James Haunt recently got together to brainstorm on how to introduce our newest bottle art, starting in our own backyard. Beautiful beaches, weather and women all seem to be the standard in this sunny Southern California beach town. As summer winds down we realized it’s never too late to add our own touch of beauty to a city that seems to celebrate summer year round. In nearly 12 hours James Haunt and a small team of friends got together to give the town a facelift on 2 of Carlsbad Village’s most visible locations. The added color and beauty is something you can’t miss and is worth the trip to see with your own eyes. We predict a social media spike for anyone that jumps in front of these for their next selfie. Enjoy a behind the scenes look at the process with our newest artist James Haunt.
August 18, 2017 November 23, 2017 Uncategorized
We all know that booze on cruise ships is notoriously expensive, for mostly poor quality products. In others words, you won’t be finding any Trust Me Vodka anywhere on board. We can’t live without Trust Me Vodka for ten days, but also can’t, in good conscience, tell you how to sneak it on board. Nor would we, because nobody likes a snitch. But what we CAN tell you is how NOT to sneak booze on board, because they’re on to all you booze smugglers. We did a little research and found they are calling you out on their BLOGS, fam. So, time to get more creative. 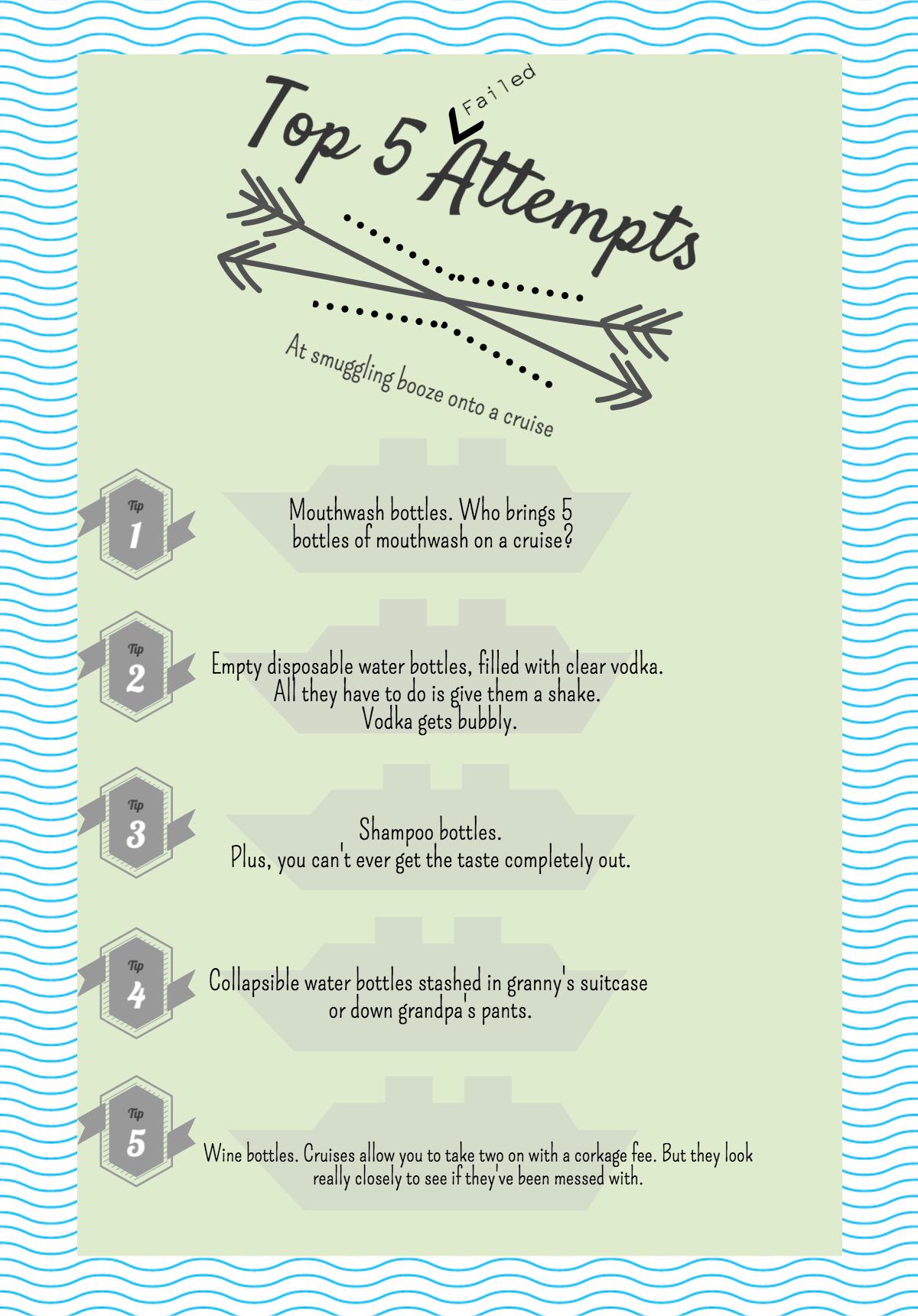 “I’ve had amazing conversations and experiences with people that I’ll probably never see again. That fuels me to paint more and to experience more, give more, and create more.” James Haunt

James Haunt was raised in East Los Angeles, where he became interested in art through comic books, graphic novels and pop culture. He started drawing because, as a bit of a troublemaker, he spent a lot of time in his room being grounded. As Haunt evolved as an artist, he got into the graffiti scene. After studying graphic arts in high school, he began to shift his focus to a more commercial and less dangerous outlet for his creativity.

“I’ve been in some shitty situations, but I’ve always felt like I had something to offer. I’ve never felt like a victim. From that, I put strength into my artwork. It’s not something for myself, but it’s to be shared.”

His breakthrough moment came at an Agenda (action sports) trade show. Rumor has it Haunt engaged in a little guerilla marketing by stamping crisp one dollar bills with the James Haunt smiley face logo over George Washington’s likeness. He dropped them casually as he strolled through the aisles. People picked them up, saw the logo and went looking for more until they saw the same logo on Haunt’s booth in the show. A star was born.

Since then, Haunt has built his career as a working artist, kind of a unicorn among creatives. It’s rare for artists to support themselves doing exactly what they love, in its purest form. His art has allowed him to travel and meet people all from all over the world.

James Haunt has been commissioned to do spray painted murals for Red Bull’s offices, Big Bear Resort, Hotel Erwin, Wahoo’s and at too many locations to list in the Los Angeles and Palm Springs areas. Haunt is influenced by the California lifestyle, specifically the sun, the palm trees and that feel-good vibe endemic to beach culture. He paints what makes him happy, which for right now is a recurring theme of beautiful women.

“I learned that repetition is a great way of marketing yourself…to force a style into people’s visuals…I’m happy about getting recognized without having to sign my name on a piece.”

James Haunt and Trust Me Vodka

Trust Me Vodka supports artists by allowing a total takeover of our bottles, offering them a wide-ranging commercial canvas. It’s our thought that vodka may be colorless, but the bottles don’t have to be. We immediately connected with Haunt, sharing the same passion for our respective crafts.

“This collaboration is something that just felt organic and natural…You can sit down and have a cocktail with someone and barely speak the same language but laugh for hours and into the evening and walk away as friends. There are few things that bring people together, but I feel like sometimes having a drink can do that.”

From walls to dollar bills or to buildings, Haunt is now offering his art to the world on limited edition Trust Me Organic and Gluten Free Vodka bottles. Our vodka won’t last long, but the James Haunt bottles can take a more permanent place on the shelf, in a glass cabinet or on your counter. Look for them Summer of 2017.