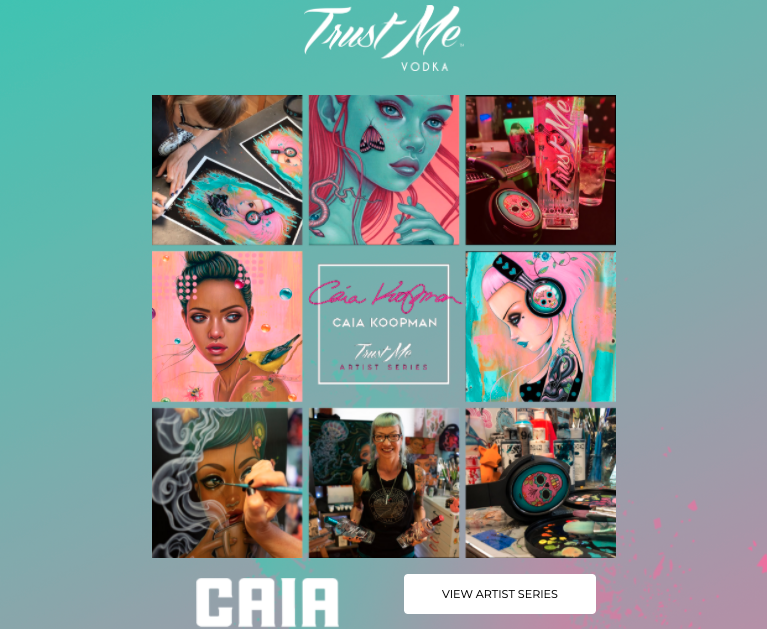 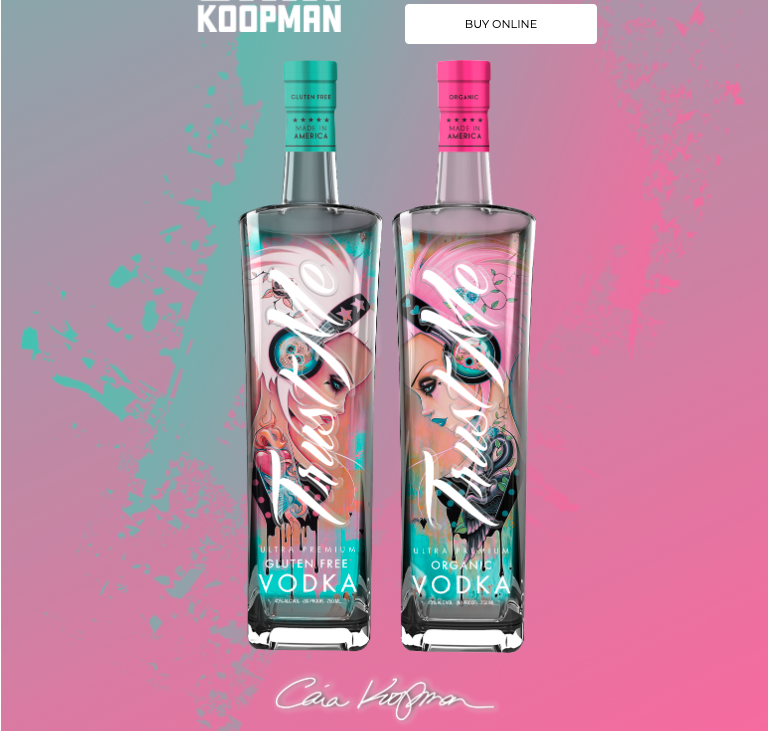 After being commissioned by Trust Me Vodka to create the mural, Golik said it took her and the team over three weeks to complete.

SAN DIEGO — The Mural of Hope was unveiled Sunday afternoon in downtown San Diego at Mixon Liquor and Deli, which has been a staple in the community since the 1930s. The mural’s creator said the piece is a symbol of humanity coming together which she believes the world needs a lot of right now.

“Liberty” is the mural’s name and Russian-born, pop-surrealist and artist Evgeniya Golik originally created the painting in 2017 to show the diversity of San Diego and around the nation.

“It’s a symbol of the country itself. It’s like a mother figure. That she embraces all these people represented in the eyes, in this case. So they all have different colors and different skin tones. It doesn’t [matter] the age, race, no matter your background, you’re loved,” Golik said.

After being commissioned by Trust Me Vodka to create the mural, Golik said it took her and the team over three weeks to complete. She said she realized that painting the mural at Mixon Liquor & Deli would impact more people and take on a new meaning.

“We really need this message of unity now because there’s been so much arguing and hate. It honestly breaks my heart, so I feel very honored and proud of this project,” Golik said.

Mixon Liquor is in the heart of downtown San Diego on First Avenue and the mural can be seen by thousands of people in the area. The mural concept is also a part of the Trust Me Vodka brand, serving as its packaging label for a special edition.

“I’m grateful to Trust Me Vodka to discover me and trust me with this and I think out of all my paintings that I’ve ever done, this is the one I wanted to be mural,” Golik said.

Trust Me Vodka had “Gold Flake” Collector Boxes also featured in the Everyone Wins gift bags given to Oscar nominees.

Ten percent of the proceeds from Trust Me Vodka sales Sunday will also be donated to the San Diego Foundation for Arts and Culture.

Most consumers these days prefer to shop from companies that exercise creativity and craftsmanship rather than simply producing a good product. Many spirit brands have very minimal branding and no personality, despite being a fun industry. Trust Me Vodka is an ultra-premium, American-made brand that decided to break that mold. Trust Me Vodka is a unique brand that features artists on every bottle as a way of showcasing their commitment to the arts. They allow the artists to tell a message through every bottle, and get some recognition that they may not have garnered otherwise. The creators of Trust Me have a strong affinity for vodka as well as giving others a platform to express their creativity. They saw a unique opportunity to create a top-tier spirits brand while simultaneously showcasing the talented craftsmanship of global artists. Since 2017, Trust Me has partnered with 15 different artists to display their art on the bottles of vodka. Trust me is constantly looking for the next up-and-coming artist. In 2017, the very first artist to grace their bottles was Jeff Soto, an American contemporary artist known for his distinct color palette and street art. What makes each bottle of vodka so special is that each bottle is part of a limited series that will become collectible once all of the 20,000 that are manufactured are sold. For vodka drinkers or art enthusiasts, Trust Me provides a beautiful piece of art to display on their bars at home. The art shown on the bottles ranges from contemporary, modern, abstract, and more. As true aficionados of the art world, Trust Me is looking to expand from working with traditional artists to fashion, film, music and more. On to the star of the show: the vodka. For all of the vodka connoisseurs, Trust Me offers two different spirits along with bottled cocktails. The organic vodka is made from wheat, while the gluten-free vodka is made from the finest Idaho potatoes. Trust Me prides themselves on being made from 100% clean ingredients. The gluten-free vodka is smooth and subtly sweet, while the organic vodka is known for its clean and crisp profile without the harsh kick. Everyone loves a good farm-to-table moment, so why not have the same when it comes to spirits. The farm-to-bottle approach is one that will likely become increasingly popular as consumers aim to live a more sustainable lifestyle. Trust Me has also recently launched a line of premium bottled cocktails. As Americans spent the past year indulging from home more frequently than ever before, Trust Me knew these bottled cocktails would be perfect from the comfort of your own home or if you decide to head to the park on a sunny day. Whether you prefer a Bloody Mary or a Sex on the Beach, the bottled cocktail line has something just for you, and it tastes just as though it was crafted by a mixologist in your favorite bar. Trust Me Vodka is committed to continue their promotion of artists and make the best-for-you vodka possible. To learn more, visit their website or follow them on Instagram.

This article was produced in partnership with Trust Me Vodka
Mankind’s most impressive discoveries and innovations occur at the junction of seemingly disparate areas of human knowledge: biology and technology merge to produce the miracles of biotechnology; genetics and engineering have become inseparable, promising a brighter future. Examples abound, yet one alcohol producer has made a bold move to marry two surprisingly distant elements—spirits and art. Ernst Hemingway was famously quoted as saying “write drunk, edit sober.” Indeed, many famous writers imbibed to find inspiration for their written art. Trust Me Vodka, the producer of one of America’s premium vodka brands, draws inspiration from art. It’s literally displayed on each and every bottle, which in turn inspires those who drink it.

Getting noticed in the crowded alcohol market is not an easy task and requires ingenuity, talent, and a core idea capable of moving product to consumers. Visual attraction helps, of course. The spirit of creativity displayed by Trust Me Vodka manifests in truly distinctive branding with a whole story to tell on every bottle. Banksy made a name for himself by putting his art on concrete walls, pavements, and fences—and Trust Me Vodka uses its vodka bottles as a display for talented creators’ works of art.Since 2017, 15 artists have had the opportunity to create the art seen on each Trust Me Vodka bottle. Trust Me is constantly scouting for up-and-coming artists all over the world. In 2017, the first artist to commit their art was Jeff Soto—a budding artist known for his variation of Pop Surrealism and street art. No empty Trust Me bottle needs to be recycled since they’re also a genuine collectible item. Like postal stamps at the time of the stamp collector craze, each bottle is a limited series that stands a good chance of becoming a collectible item after each of their 20,000-bottle series is sold out. With art that varies from contemporary to modern to abstract, the Trust Me bottega is made up of multitalented artists.

At a time of overall food and drink sensitivity, producers have to cater to different dietary preferences, with alcoholic beverages being no exception. Trust Me Vodka comes in two kinds of spirits—organic vodka distilled from wheat, and vodka for gluten-sensitive drinkers made from a unique sort of Idaho-grown potatoes. Both beverages have distinctive smoothness and a crisp yet kick-free profile. In a bid to expand its range of premium beverages, Trust Me has recently launched a premier line of bottled cocktails that include the famed bloody Mary and sex on the beach, exotic kamikaze, and a pear-cucumber mix, among others. Trust Me mixologists do wonders, as the name would suggest.

The message in a bottle that Trust Me is sending is that of an uncompromised commitment to excellence through rare creativity. To learn more about Trust Me Vodka, visit their website or follow them on Instagram.

Vodka’s history is controversial. Its invention is disputed by Russia and Poland, the Russians claiming they were the first to make it in the 12th century, the Poles dating its birth to the 9th century in what is today’s Poland. Vodka’s popularity in the U.S. started to steeply rise in the 1950s after one enterprising food and spirits distributor introduced the now-famous Moscow Mule cocktail made with vodka, lime juice, and ginger beer. The Mule triggered a vodka craze all over the US. Vodka now holds some 20% of the North American spirits market and amounted to about 30 billion USD in sales last year. During the pandemic, vodka sales soared by a further 14%.

In keeping with the trend of vodka’s growing popularity, in the last few years, Trust Me Vodka, the producer of ultra-premium vodka from Idaho, has reinvented the iconic drink giving it a second birth to become a leader in the ongoing premiumization of the spirits industry. They managed to make it stand out by combining a perfect form with an exquisite taste. Trust Me achieves the perfection of form by committing art to the glass, making every bottle a virtual chef-d’oeuvre. The company scouts for artists all over the world, and they may well fit with the centuries-old tradition of Venetian Murano glassmakers: so much soul and talent they contribute to the company cause. Since 2017, 15 artists have had the opportunity to create the art seen on each Trust Me Vodka bottle. Very few empty Trust Me bottles risk ending up in garbage bins: you don’t want to dump a piece of art.

Trust Me Vodka’s cause is in commitment to excellence both in form and in essence. The ultra-premium drink is made from organic Idaho wheat and the pure water coming from the peaks of the Teton Mountains right to the distillery. The water, which is the lynchpin of a good spirit, is further filtered through an organic rock—the best natural filter. For those who are gluten-sensitive, Trust Me offers vodka made from potatoes rather than grain. By artfully combining nature’s three essential elements—pure mountain water, wind power, and organic grain, or potatoes— the company produces what is rightfully the ultra-premium liquor that caters to the most demanding palate.

In tune with the stay-at-home theme and mindful of vodka’s perfect fit as a cocktail ingredient because of its neutral flavor, Trust Me recently rolled out a line of bottled vodka cocktails from the famed Bloody Mary to Sex on the Beach and many more. The rebirth of vodka performed by Trust Me through the combination of art, allegiance to uncompromised quality, and masterful use of nature’s gifts have already garnered the brand a healthy—and growing— following. To learn about the brand’s line of products and its plans for the future, visit their website or follow them on Instagram.